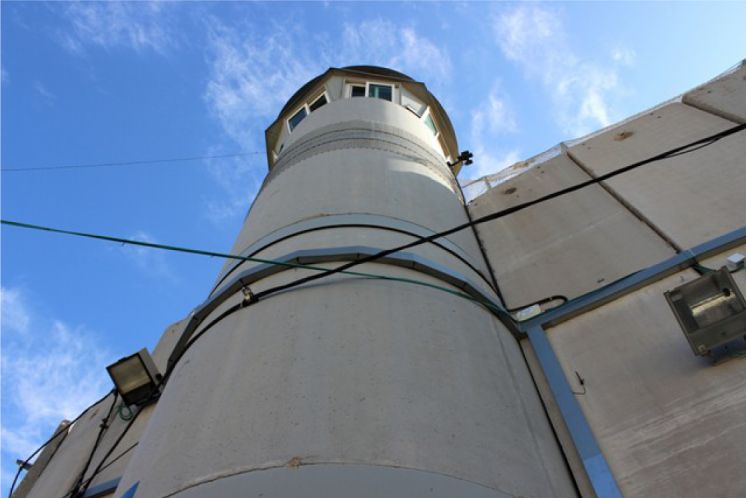 I will never forget the day when we visited both Rachel’s Tomb and Aida Refugee Camp near Bethlehem in the West Bank. In order to deepen our understanding of the Palestinian plight in 1948 (Nakba, i.e. catastrophe – mass ethnic cleansing of Palestinians by Jews from what became the state of Israel) and its unaddressed consequences, the organizers of the Study seminar took us to these two locations which are separated by a segregation wall Israel has been building in the occupied West Bank.

The images and underlying discourse we witnessed during the visit to Rachel’s Tomb was something we had read plenty about beforehand. Victimization which justifies aggression, militarism and control which are spurred on by fear and dehumanization of the “enemy”, use of nationalist (religious) myths for the purposes of current aggressive politics, are just a few basic ones. Nevertheless, it was quite hard to hear descriptions of Arabs who live beyond the wall as a permanent threat to Jews and their culture (exemplified by holy sites such as Rachel’s Tomb which is the third holiest in Judaism). As we listened to the persons who were introducing us to the history/narrative/ideology of the site (who referred to the biblical writings as to facts), visitors were arriving by public transportation and private buses, soldiers were passing with latest weapons hanging on their shoulders, the checkpoint voice would sound every now and then, armored police vehicle was parked nearby until it speedily drove off, its lights flashing. Ultraorthodox youths were loudly celebrating, dancing, singing, watched over by their grown mentors. I got a sense that an initiation ceremony was taking place but I am still not sure about it. An observant soldier, clutching his weapon, was looking out to the other side and a small Palestinian flag was waving in the distance, through the additional fence on top of the wall, barely visible. 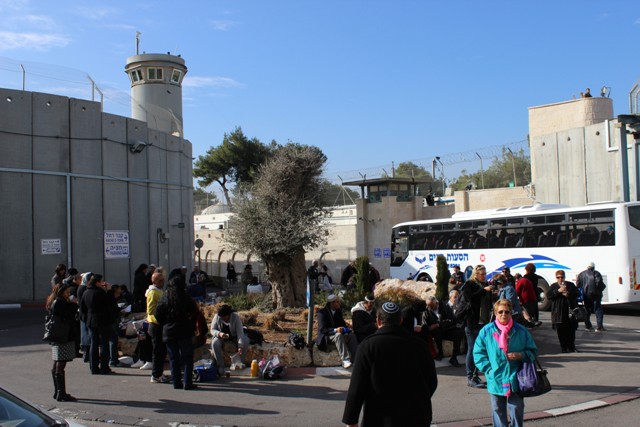 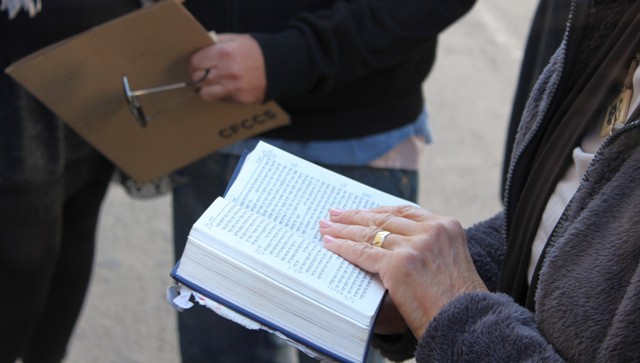 Guide at Rachel’s Tomb: “I am not making this up, it’s all written here in the Bible” 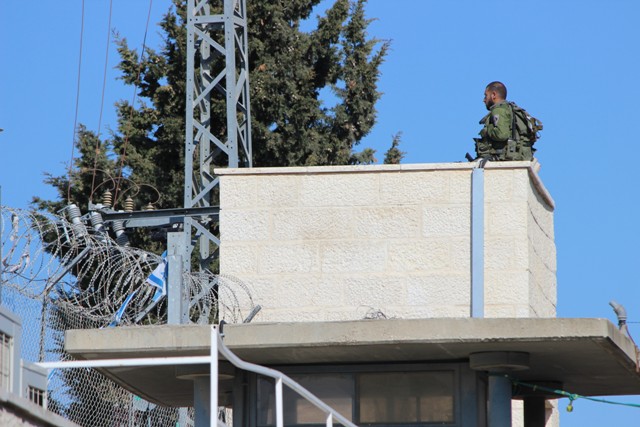 Israeli soldier looking beyond the wall, onto the Palestinian refugee camp Aida. 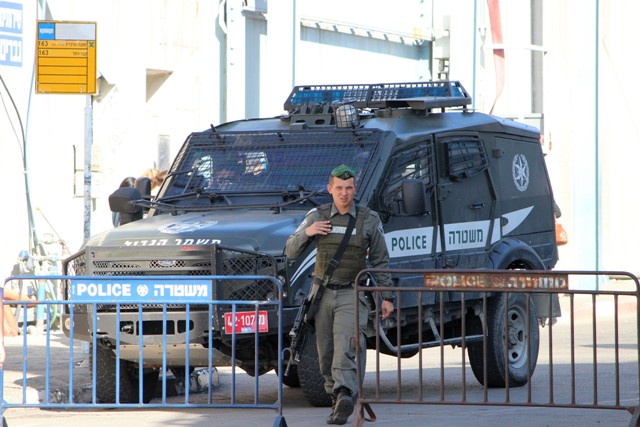 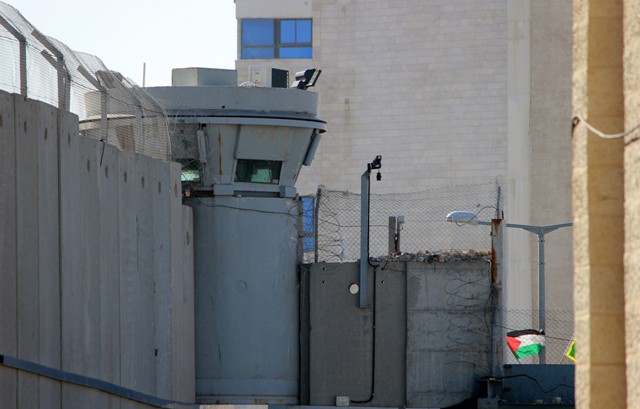 Above the wall and through the wire is Palestine

In order to get to the Aida refugee camp we had to drive around the wall, which took us a while, although the camp is right behind/in front of/ the site.

Aida refugee camp was established in 1950. Its population rose from the initial thousand to approximately five thousand, consisting of Palestinian refugees from more than forty three villages destroyed in 1948. The camp has no health facilities, unemployment rate is seventy percent, drinking water shortages are frequent since the camp depends on purchases from an Israeli company. Israeli military attacks and incursions are frequent there, arrests and fatalities as well. I knew all this before we entered, I read it online. How much knowledge and convictions do we carry within us which are a product of reading and thinking from far away, based on media representations and ideologies behind them?

I felt completely unprepared for the feeling that overcame me as we were standing a few tens of meters away from the same wall, just like we did earlier, but from the other side. Salah Ajarma, director of Laje  Center which organizes educational and entertainment activities for the camp’s children, was explaining to us how the occupation looks for the camp’s residents. Israeli military storms the camp often, mostly at night, including the Community center, in order to arrest children and men or just to “train” its soldiers, shoots teargas cans in hundreds over the whole camp, shoots rubber bullets and even live rounds at the camp’s residents, often children. Palestinians are wounded, Palestinians die. As we were talking to Salah, two Israeli soldiers, a male and a female, came out of the gate in the wall and stood in front of it, silently observing what we were doing through their sunglasses, clutching weapons. A piece of life on the other side could be seen through the opening, inaccessible to camp’s residents. A dilapidated Palestinian graveyard was on our right, and the spectacle of Rachel’s Tomb just a bit further, across the wall, across the wire. A few bullets could be seen on the ground beneath us.

The feeling that overcame me was anger, rage at such visible and strong manifestation of injustice, inequality, colonial brutal repression.

Just a few tens of meters away, next to Laje Center, United Nations and its UNRWA (United Nations Relief and Works Agency for Palestine Refugees in the Near East) signs were put up. How many more decades of repression will it take before reports will be written which will induce the world to see, hear and react? I was aware of our experience with the international community in the former Yugoslavia and all of the disappointments in it, but the schism between the world I would like to believe in and the world as it is was too big for me to contain it. Reason failed me.

Throughout the refugee camp I saw graffiti and drawings of the number 194. After the visit I did some research and realized that the number referred to the UN General Assembly Resolution 194 which was adopted on December 11, 1948, near the end of the1948 Arab–Israeli War (Nakba). Its eleventh article states: “Resolves that the refugees wishing to return to their homes and live at peace with their neighbours should be permitted to do so at the earliest practicable date, and that compensation should be paid for the property of those choosing not to return and for loss of or damage to property which, under principles of international law or in equity, should be made good by the Governments or authorities responsible; Instructs the Conciliation Commission to facilitate the repatriation, resettlement and economic and social rehabilitation of the refugees and the payment of compensation, and to maintain close relations with the Director of the United Nations Relief for Palestine Refugees and, through him, with the appropriate organs and agencies of the United Nations.”The usual narrative is that the socialist Yugoslavia, as an anticolonial and anti imperialist state, supported the Palestinian struggle for freedom. But, Yugoslavia voted against the resolution since it was, at the time, closely aligned with the USSR which was closely supporting Israel. Yugoslavian pilots even flew some of the Czechoslovakian planes part of the way toward Israel. The delivery of this military aid affected the outcome of the war to a large extent. In effect, it created some of the conditions for this camp’s existence. 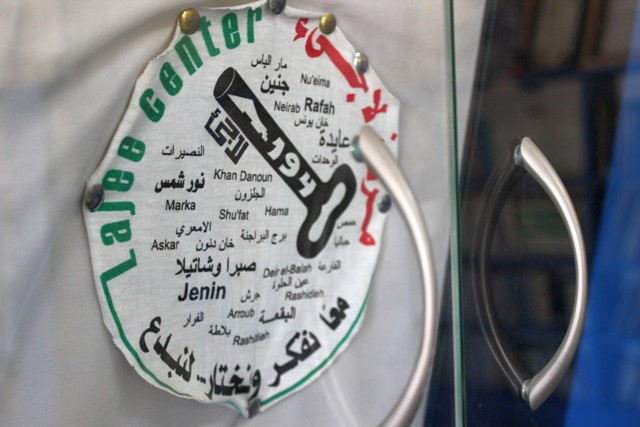 Palestinian Key of Return at the Laje Center 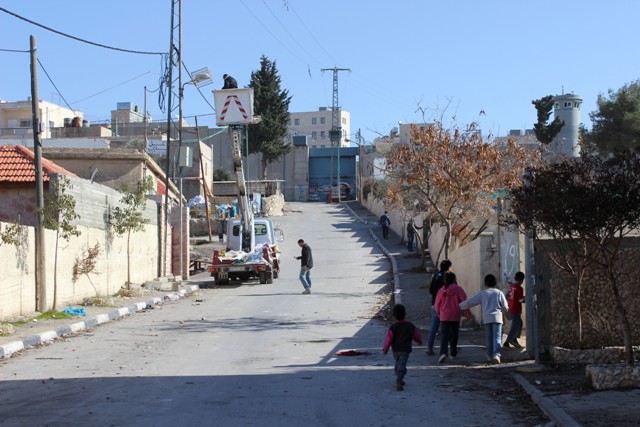 Main street at the Aida refugee camp, view from in front of the Laje Center. Rachel’s Tomb is behind the fence in the distance 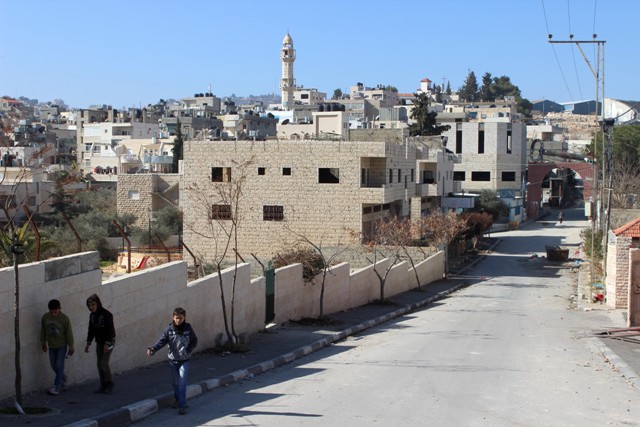 View of the Aida refugee camp. The segregation wall is fifty meters behind 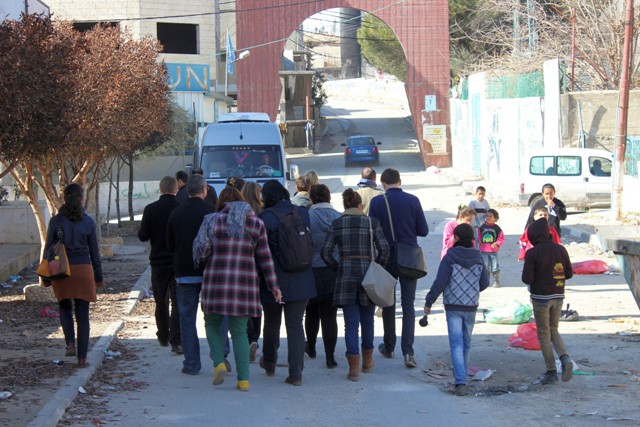 Our study visit group and children at the camp 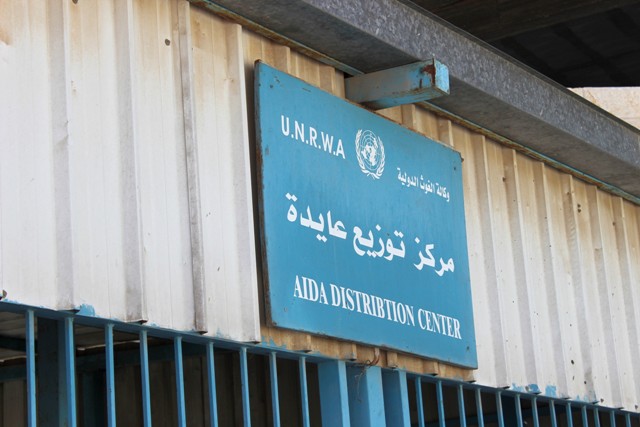 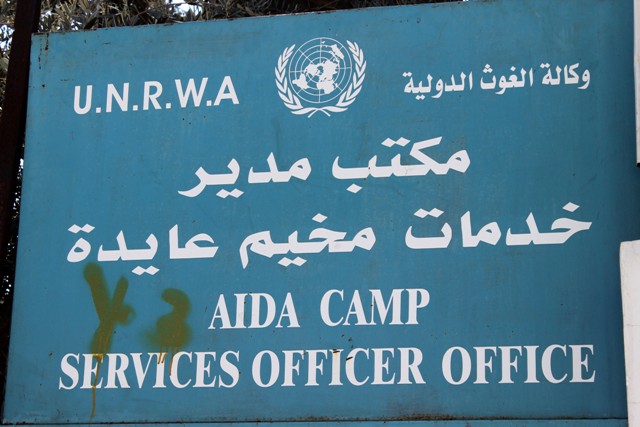 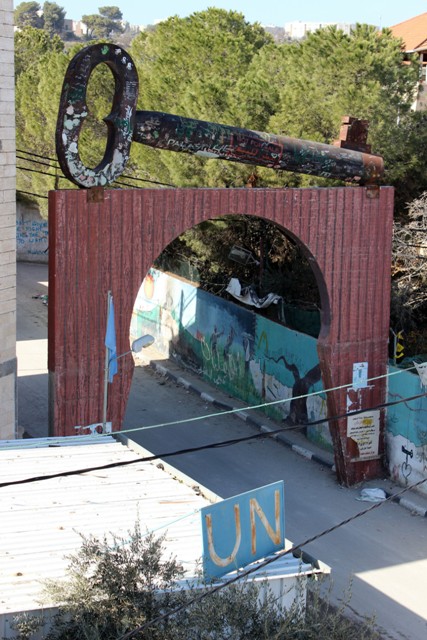 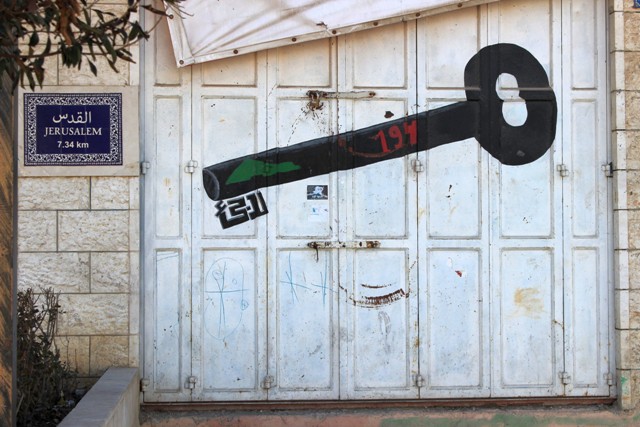 Graffiti in front of the Laje Center. 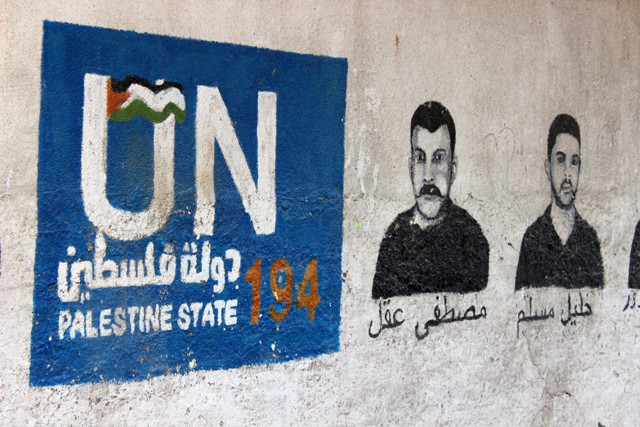